The modern-day boiler room continues to exist in the Operating Suite.   The amount of resilience and fortitude it takes to survive the training alone could compare only to other high stress and high stakes jobs like bomb disposal technicians.  There is no wonder that physicians command the highest suicide rate second only to Marine Engineers.  Yet despite this little has changed in medicine to help alleviate this burden and young self-sacrificing medical students will continue to choose a profession that may literally kill them.

Some people are extraordinary

The buzz word for physician burnout in the medical journals and c-suites continues to revolve around Resilience.   Not fully understanding the concept and recently overcoming the throes of burnout, I decided to investigate for myself what this concept means and how it applies to my situation.

What is Resilience? According to Friborg1:

For centuries, writers have been inspired by the extra-ordinary capacity some people show in combating adversity or misery. In psychology, however, the study of unexpected positive outcomes, today referred to as resilience.

The historical background of resilience:

Since 1995 numerous researchers have sought out a way to define, organize and ultimately measure the elements of resilience for two reasons 1:

Ultimately the researcher’s search for the elements or traits of a person which would enable them to survive “extraordinary” circumstances.   Instead of looking at the problem, the focus centers on the individual and mechanistically structures a person who can withstand stress, a super being.  Therefore if they fail the person was not good enough to handle the pressure.

Hopefully, this leads to flashbacks in your own career or training.   “Calling me is a sign of weakness” as an example.  We self-select in medicine in general and surgery in particular to find the person willing to take abuse, pressure, sleep deprivation and very long hours to maintain the façade of the profession.  Some call it “training” others may call it educational Brainwashing, look up Patty Hurst, one of the most famos examples in this country.

What are the pillars of resilience? 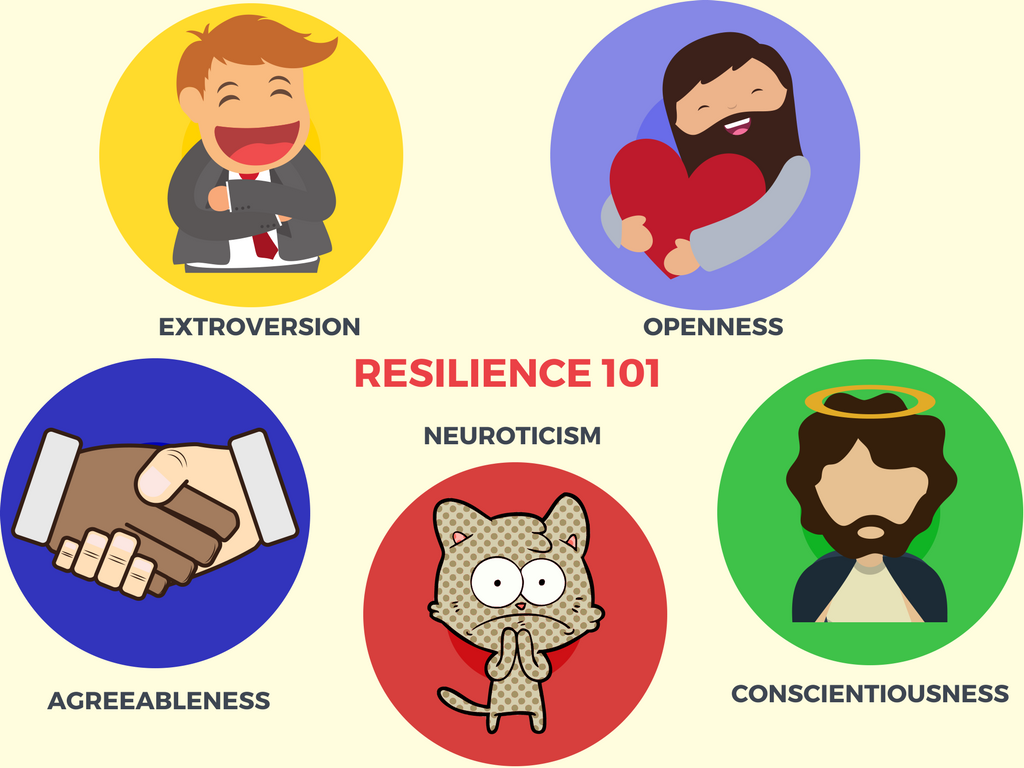 They are known as the Big 5 in psychology which includes:

The original list included 16 different factors but over time researchers discovered these five were the most important and they seem to be universal across many customs and cultures.   The test subject gets measured on each of the five traits and then assigned a score.  This score then can potentially predict which person will crack under pressure.   According to Friborg each of the big 5 carry different weight and can be more predictive than other traits.

This trait reflects a person’s ability to have tendencies toward fantasy, aesthetics, feels, ideas and values which are usually clustered together.  “Openness involves six facets, or dimensions, including active imagination (fantasy), aesthetic sensitivity, attentiveness to inner feelings, preference for variety, and intellectual curiosity2.”  On a very basic level some people are considered to be either open or closed minded within a spectrum.

This trait consists of the following factors sociability, social impact, leadership, competitiveness and social boldness.  When combined with social competence, it creates a network effect where the individual by extension would usually have a stronger family cohesion and supportive friendships which could help in times of crisis in both magnitude and number.

All the traits are positive when present but the opposite is true when neuroticism is present.   It can be thought of as not having emotional stability and instead exhibits degrees of depression, anxiety and impulsiveness.   A person with a high degree of neuroticism usually is self conscious and therefore vulnerable to outside influences.   Usually negative thinking dominates beliefs of self and of the future in general.   As a result it is possible to have difficulty planning for the future.   This was not my favorite subject to research, It got me nervous!

Claimed to be the most important trait since it gives the most protection from stress and confers the ability to recover more rapidly after an insult.   Not impulsive the conscientious person prefers planning using routine and habits to guide achievement.  As a result they typically have the strongest work ethic and get the most education.  One of my favorite sayings, “if you are on time, you are late,” reflects the singular drive of the conscientious trait, punctuality.

Usually considered a weakness by the strong-willed, bootstrapping doctor, this trait really reflects what we need most as healers and mentors which strongly corresponds with empathy.   Not a pushover the agreeable person has the ability to harness a sense of closeness toward relationships with peers, family and patients.   As a result are capable of creating more trust and cooperation within these relationships.  Not a bad idea if we want to create more social credit with the people in our lives.

After reviewing these traits and taking time digest them, a clearer picture began to emerge in my own life.  I also took the Resilience for adult test and to my surprise I didn’t have a perfect score or even close!  Am I a resilient person or not?   Can I become more resilient by aligning myself with the Big 5?  Curiously cognitive ability according to the data actually places a person more at risk than if they were of average ability.   Then there is social intelligence which is defined as the ability to:

If I can’t change who I am perhaps I can gain some skills to soften the blow.   Social intelligence combined with agreeableness can lead to overall greater social competence with resultant greater social resources.  In time of stress people with a support network will not only get direct support in number but also in magnitude.  The more we plant seeds in the spring the greater the harvest in the fall.  Networking in this regard is lifesaving in times of crisis and most people like myself will always go at it alone.  I have since then changed course and make every effort to bring agreeableness into my life as best I can.

Am I resilient?  I am not sure but do physicians need extraordinary abilities to survive the operating room environment?   Until the fundamental question of why the culture persists, the answer is… Get your superman/superwoman outfit on, and serve me a double dose of cortisol.

4 thoughts on “Resilience 101 Are you at risk for burnout in surgery?”