All three of my children believed in Santa Claus, the Tooth Fairy, or the Easter Bunny, at some point.  Heck, I am pretty sure my 12-year-old has figured it all out by now, but he is too smart to up such a good gig!  As their frontal lobes mature, so does their ability to separate fact from fiction.   Yet despite most adults’ ability to reason, many still believe the myth of the wealthy physician.   Most physicians today graduate with crushing debt compared to their predecessors.  The average amount of student loans for some can range between $189,000 and even exceed $500,000 in some cases.   The payments start day one after graduation, and if the interest isn’t paid, then it will compound- ouch! The myth of the wealthy physician starts to unravel.  New doctors, for the most part, are poor.

Let’s examine this common claim.   My data is a little old but it still demonstrates a salient point. In 2005, Prince et al, undertook a survey by means of mail (wow).  They estimated that out of  890,000 physicians, only 43,700 were affluent, or less than 5%.   For the purpose of this study, they considered anyone who had a net worth greater than $5 million dollars as affluent, and even without inflation adjustment, I would agree that this number represents a substantial milestone in the accumulation of wealth.  Also, the data set excluded physicians with inherited wealth.   Of the affluent docs, only 16% of them had a net worth in excess of $10 million dollars, or 0.007%.  So, in the days of Forbes billionaires list where the “rich get richer,” doctors represent a fraction of a percent in terms of real wealth.  Myth busted.

How does age factor into wealth?

If we read other financial physician bloggers, like the White Coat Investor or Physician On Fire, we learn very quickly the key creating wealth starts early in the physician’s career.  Accumulating wealth takes years of diligent saving, investing, and compounding interest.  In many cases where a physician lives within or beyond their means, the creation of affluence will never happen.   The data supports this, as less than 11.5% of the physicians that have a net worth greater than $5 million were under 45 years old.   Therefore, if you believe the data, 0.575% of physicians under 45 years old are wealthy (again we are talking about self-made docs).   This represents about 60% of the physician workforce in the U.S. according to statista.com.  If a physician has reached affluence, they most likely are older than 45 years.  The myth breaks down further.

Why does the myth of the wealthy physician persist?

Money as a topic of polite conversation has always been taboo.  As Tony Robbins says in his book, Money: Master the Game, “We might discuss wealth in polite company, but money is explicit, it’s raw.  It’s garish, it’s intensely personal and highly charged.  It can make people feel guilty when they have it, or ashamed when they don’t.”  Only recently, in the blogosphere, have brave individuals begun to have an open conversation about money.  The FIRE movement and the likes of Mr. Money Mustache and others have begun to approach the conversation about money not in terms of shame or guilt, but in terms of what money really is – a tool and resource for a better life.  Some people could argue that the pursuit of money  is equivalent to the pursuit of greed, and this also contributes to the taboo of sharing information about money.  According to Maslow’s Hierarchy of Needs, one can only begin to work on fulfilling the higher pursuits of psychological and self-fulfillment needs, after one’s basic needs have been met.  It is money that provides us with the ability to fulfill those basic needs, and therefore, the security to pursue other more noble levels of existence such as love, self-esteem and self-actualization.  In this model, a person will never be able to reach these levels if they constantly preoccupy themselves with making ends meet, or living pay check to paycheck.  One could then argue that the accumulation of a security blanket of wealth is a noble pursuit, and should be discussed openly for the sake of helping one’s self and others.   This of fear talking about money for the sake of sounding crass is the reason the myth of the wealthy physician persists. 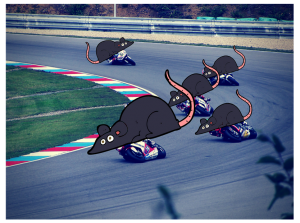 On one rare locker room occasion, the topic of retirement came up.  I am not sure what triggered this conversation, but I think it was prompted by the conversation around my current wish to go part-time.  An older colleague asked how much I would like to have in net-worth upon my retirement.   Taken aback and unprepared for the question, I answered,  “Somewhere between 3-4 million dollars,” feeling a little ashamed.   He replied, “Really, I am hoping to have at least 8-10!”   Shocked, I asked,  “Why so much?”   He retorted, “I want to be very comfortable.  I’ve grown accustomed to a certain lifestyle, and I want to maintain it.”   That exchange ended quickly.  This colleague for better or worse wants to live like a rockstar in retirement, which is cool, but at what cost?   I know reaching this level isn’t impossible, but I also don’t want to work until my health has deteriorated to the point that I need that money to keep me alive!  I think I would rather be a little more frugal and maybe a little less comfortable now and later, in exchange for more free time now – when my health is at its peak, and my children are young.   I realize that this is a highly personal choice, but the question arises – how many docs want to be “very comfortable” in retirement, and at what cost?  Also, when we speak of the wealthy physician, is wealth only measured in financial net-worth, or are we missing some priceless intangibles, like physical and emotional health? 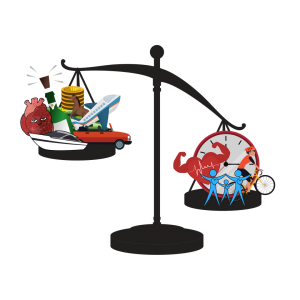 After that conversation, I began asking others what would be their hypothetical ideal number for retiring.    To my surprise, I had encountered numerous individuals who had the same goal- $10 million!  How can this be?  Is the data flawed?  Am I working with some of the richest, most savvy investors in the world?   Or is something else going on?   I confess that I do remember at some point having a pie in the sky dream of having $10 million, until I realized how very improbable or difficult that goal would be.  I am also guilty of promoting this dream of the wealthy physician to others around me and now I have some damage control to do, especially in my immediate family.   I wonder how many physicians have realistic expectations of their net-worth at their retirement?   Am I  guilty of propping up the myth too?  I think so, at least until recently…

Physicians are truly blessed! As a result of hard work and delayed gratification through our education and training, we have the satisfaction of practicing in a prestigious career, and are treated with the highest respect in our communities.  For this, we receive good compensation.   We receive multiples more than average-earning professions.  We also get to enjoy other benefits such as regular vacations, nicer homes, and other amenities.   All this comes at a price in terms of hours spent at work, taking call, and working in high-stress situations, with lives of others being at stake.  What I hope to demonstrate is that physicians on the surface may look wealthy, but in reality, have comfort but not wealth.  Again, I do not want to imply that we as a whole are suffering in any way, but I don’t know any docs who have private jets or yachts (ok, just one but he doesn’t count, since he didn’t make his fortune from clinical practice).

Some physicians buy into the myth

My part-time position just started March 1st.   I openly admit that luck played a major role in this transition, thanks to an excellent job market and even better stock market returns.  Before this transition, I did not show very good restraint in my annual spending and looked more like Dr. Carlson from POF classic post.  Now that I have taken a 25% haircut in salary (more like 21.5% thanks to the progressive tax system), I have no choice but to budget and live within my means.  While this change may necessitate a long-overdue trimming of the fat from our loose spending habits, it has afforded my something that money can’t buy – time with my children while they are still young, and time to pursue interests outside of the wheelhouse of my hospital job setting.  After looking at Porsches, BMWs and Land Rovers in the physician’s parking lot, it seems more clear as to why many people believe the myth of the wealthy physician.  How many of those cars are leased or purchased with 0% financing?   Before I came to grips with the wealthy physician myth, I probably would have considered purchasing one too just to maintain the image and keep up with my peers, but not anymore.  If anything, those possessions have now come to represent the golden handcuffs keeping many docs at a job, whether or not they enjoy their work, in a virtual prison of their own creation.

Ironically, what has been proven in economic studies- that more money will only bring more happiness up to a point– also holds true to physicians.  Of the 43,700 affluent physicians previously mentioned, none were any happier having higher wealth.  Instead, the study showed the opposite.  Once they had the money, they lived their lives in fear of losing it, like a mad leprechaun protecting his pot of gold.   I guess Notorious B.I.G was right, “Mo money, mo problems!”  What if rather than trying to win the game by scoring the most points, we score just enough points to finish the game intact?  In other words, why win the financial game with the largest possible margin and sacrifice everything in doing so?   Robert Kiyosaki, of Rich Dad Poor Dad fame,  always says if you want to win, you have to give yourself a financial education.   Simply stated, know the rules of the game, have a strategy, and when you score enough points the game is over.   It sounds easy enough but for some reason or some people (like me), it isn’t.

If you wish upon a Star

I like what one blogger said to sum it all up.   “Are you working toward your goals–or wishing upon a star?”   Personally, I am done with the 10 million dollar myth, and the myth of the wealthy physician.

Thanks for the Visit,